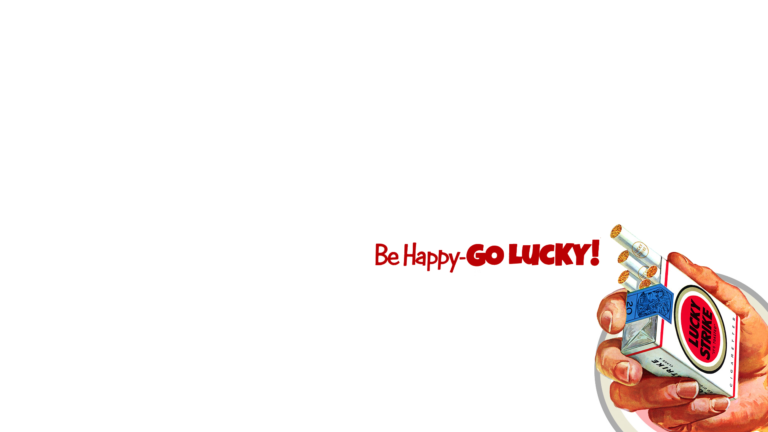 Advertisement  or Ad – a notice or announcement in a public medium promoting a product, service, or event or publicizing a job vacancy.

Commercial  – a television or radio advertisement

Advertising is the art of convincing people to spend money they don’t have for something they don’t need.

Do you think that cigarettes and alcohol need advertising?

LEE GARNER SENIOR: I just don't know what we have to do to make these government interlopers happy. They tell us to build a safer cigarette, and we do. Then suddenly, that's not good enough.

LEE GARNER JUNIOR: We might as well be living in Russia.

LEE GARNER SENIOR: Damn straight. You know this morning, I got a call from my competitors at Brown & Williamson, and they're getting sued by the federal government because of the health claims they made.

ROGER: We're aware of that, Mr. Garner. But you have to realize that through manipulation of the mass media, the public is under the impression that your cigarettes are linked to... certain fatal diseases.

LEE GARNER SENIOR: Manipulation of the media? That's what I hired you for. Our product is fine. I smoke them myself.

LEE GARNER JUNIOR: My Granddad smoked them. He died at 95 years old. He was hit by a truck.

ROGER: I understand, but our hands are tied. We are no longer allowed to advertise that "Lucky Strikes" are safe.

LEE GARNER SENIOR: So what the hell are we going to do? We already funded our own tobacco research center to put this whole rumor to rest.

ROGER: And that's a great start. But it may not affect sales. Don, I think that's your cue.

PETE: I might have a solution. At Sterling Cooper, we've been pioneering the burgeoning field of research. And our analysis shows that the health risks associated with your products is not the end of the world. People get in their cars everyday to go to work, and some of them die. Cars are dangerous. There's nothing you can do about it. You still have to get where you're going. Cigarettes are exactly the same. Why don't we simply say, "So what if cigarettes are dangerous?" You're a man. The world is dangerous. Smoke your cigarette...You still have to get where you're going.

LEE GARNER JUNIOR: That's very interesting. I mean, if cigarettes were dangerous, that would be interesting.

LEE GARNER SENIOR: Except they aren't. Is that your slogan? "You're going to die anyway. Die with us?

PETE: Actually, it's a fairly well established psychological principal that society has a "Death Wish". And if we could tap into that, the market potential--

LEE GARNER SENIOR: What the hell are you talking about? Are you insane? I'm not selling rifles. I'm in the tobacco business. I'm selling America. The Indians gave it to us for shit’s sake.

LEE GARNER JUNIOR: Come on, Dad. Let's get out of here. The bright spot is, at least we know that if we have this problem, everybody has this problem

DON: Gentlemen, before you leave, can I say something?

DON: The Federal Trade Commission and "Reader's Digest" have done you a favor. They've let you know that any ad that brings up the concept of health and cigarettes together, well, it just makes people think of cancer.

LEE GARNER SENIOR: Yes, and we're grateful to them.

DON: But, what Lee Junior said is right. If you can't make health claims, neither can your competitors.

LEE GARNER SENIOR: Great, so we got a lot of people not saying anything that sells cigarettes.

DON: Not exactly. This is the greatest advertising opportunity since the invention of cereal. We have six identical companies with six identical products... We can say anything we want. How do you make your cigarettes?

LEE GARNER SENIOR: (to his son) Shame on you. We breed insect-repellant  tobacco seeds, plant ‘em in the North Carolina sunshine, grow it, cut it, cure it, toast it, treat it...

DON: There you go.

LEE GARNER JUNIOR: But everybody else's tobacco is toasted.

DON No. Everybody else's tobacco is poisonous. "Lucky Strike" is toasted.

ROGER: Gentlemen, I don't have to tell you what you've just witnessed here.

LEE GARNER JUNIOR: I think you do.

DON: Advertising is based on one thing: happiness. And you know what happiness is? Happiness is the smell of a new car... It's freedom from fear. It's a billboard on the side of the road that screams with reassurance that whatever you're doing is okay. You are okay.

Say the following phrases without pauses and interruptions.