One day a man went to see his doctor and said to him, ‘I’ve swallowed a horse, doctor, and I feel very ill.’

The doctor thought for a few seconds and then said, ‘All right, Mr. Lloyd, I’ll help you. Please lie down on this bed.’ The doctor’s nurse gave the man an injection, the man went to sleep, and the doctor went out quickly to look for a horse in the town.

After half an hour he found one, borrowed it, and took it into his office, so when Mr. Lloyd woke up, it was there in front of him.

‘Here’s the horse, Mr. Lloyd,’ the doctor said. ‘I’ve taken it out of your
stomach, and it won’t give you any more trouble now.’

At first, Mr. Lloyd was happy, but then he looked at the horse again and said, ‘But, doctor, my horse was white, and this one’s brown!’

1. Did the doctor think, ‘This man has really swallowed a horse’?
2. Why did the nurse give the man an injection?
3. What did the doctor do when he went out?
4. What did Mr. Lloyd see when he woke up?
5. Why was Mr. Lloyd not happy when he looked at the horse
more carefully? 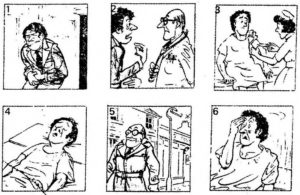