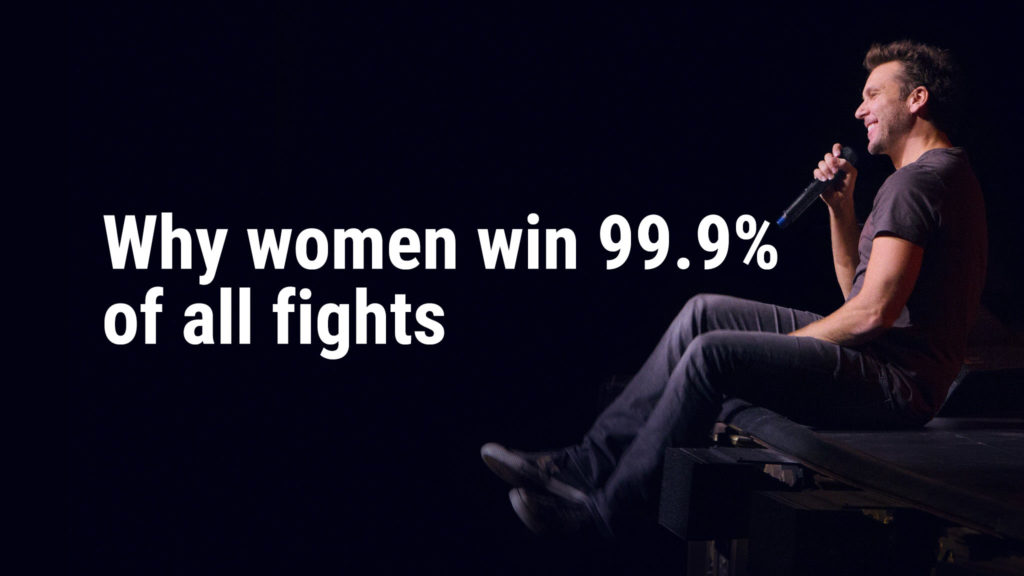 What do couples usually argue about?

Do you think men and women use different strategies when they argue?

Why do women usually win in an argument?

Now,  lemme tell you something. Lemme tell you why women, you, win 99.9% of all fights. Yup. Yup. And I’ll tell you why right now. Here it is. Because you are mental terrorists. (Applause) You are brain ninjas. And you know how to get in there with your catana and just cut us. And disappear into the night. I’m gonna tell you right now. This is how they do it guys. I’m gonna, I’m gonna help you so you know when it’s coming next time and you maybe know how to stop this encounter from happening. Here’s what’s gonna happen. You’re in the fight, okay? It’s going back and forth. She’s preparing to say a comment, okay? She’s got a comment on tap that she’s gonna say, and it’s the tiniest, it’s just a little Tic Tac-sized comment. But this is a fucking detonator. She’s gonna say it, and it’s gonna go deep into your cerebellum, and it’s gonna sit there, and at some point, three days later, thirty days later, it’s going to explode, rotting you from within. I’m telling you right now. She’s gonna say this comment, and here’s when you know it’s coming. Physically, I can show you when it’s coming right now. This is the physical movement that she’s gonna give to you. You’re saying, Dane, how do I know? How can I prepare myself? Here’s when it’s gonna happen. During the argument, there’s gonna be a point where she’s gonna stop and change her game up. The minute she starts agreeing with everything you’re fucking saying, look out. You are in trouble, and I’ll show you physically what’s gonna happen. You’re gonna see her leg do this (bends leg up and sticks it out). The moment her leg locks like this, you’ve just driven into Fuckville. And she’s the mayor.

So she’s locked. They’re lovin’ it right now! They’re lovin’ it! Now at this point, she’s gonna start agreeing with everything you’re saying, and that is bad. The moment you start hearing her go, “You know what? You’re absolutely right. You’re absolutely right, and I didn’t even know. Why would I even know because you’re the Czar of Right, and we’re all just floating in the Sea of Wrong as you go by in your Ship of Right. Just please, tell me. Throw me a lifeline so I know. You’re right! I don’t even know if I’m right about this. I could be wrong about right now. But you know. Why don’t you tell me if I’m right right now?”

Right there (pointing to his leg). The minute she starts hitting you with that, you better be prepared ‘cause there is a fucking torpedo in the water, and it’s coming to getcha.

Okay, so physically, here’s what she’s gonna do. She’s gonna lock the leg. And after she’s done with her little, “You’re right, you’re right,” she’s gonna do something with her, with her hand, with her arm. It’s always different, but it involves touching her own face, and then doing some kind of windshield wiper movement.

She’s gonna vary it up, but it’s gonna be something like this (locks leg, shakes head, touches face, waves hand in front of face, tucks hand under chin). And look for this (tucking hand under chin). This is bad. “Um, no you go ahead.”

Right, she does the thing (goes through leg and hand motions quickly), she’s gonna turn, and then she’s gonna go like this, “Well you’re stupid like your father.” (Laughter)

And at first, that means nothing. At first, we laugh at it. You say, you walk away, we’re like, “Ha-ha-ha-ha. What does that even mean? Bye. Ha-ha-ha-ha-ha.” We have no idea that you just fuckin’ ninja-ed our brain. We’re gonna be in the basement forty minutes from then just pacing. And it’s gonna slowly start to seep in. We’re pacing back and forth thinkin’ about it. “(nervously) Hahahaha stupid like your father…(starts breathing heavily) MY FATHER’S A BRILLIANT MAN!